International cooperation with Russion institutes will investigate fundamentals of fusion
18 November 2008
The Dutch government, via funding agency NWO, has awarded Rijnhuizen a 500 k€ Centre of Excellence-grant for cooperation with four major Russion research labs. Dr. Tony Donné from the Rijnhuizen-institute will lead the collaboration, with dr. Boris Kuteev from the Kurchatov-institute as second chair.

The new Centre of Excellence for Fusion Physics and Technology will involve scientists from the Russion Institute of Applied Physics and the Kurchatov, Ioffe and TRINITI-institutes, as well as the Dutch Rijnhuizen-institute. They will investigate the fundamental physics of fusion plasmas produced in ITER-like installations. Energy transport, plasma instabilities and plasma-surface-interaction are the main areas of research.

From the letter awarding the grant: "The referees were all very positive about this application and the committee shared this opinion. It was felt that the groups involved were among the best in the world in this field of research. This was a wide-ranging application which combined the extensive experience of the researchers involved. The involvement of the Russian researchers was of clear added value." 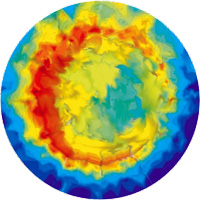 Image credit: Rijnhuizen.nl
Measurement of a magnetical instability in the TEXTOR-tokamak. The red/yellow area is hotter than the surrounding plasma and is trapped by magnetic fieldlines. Left to its own devices, the instability will grow and heat up, until it breaches the magnetic containment. The energy in the central part of the plasma then quickly leaks into the much cooler plasma near the reactor edge. Experts within the Centre of Excellence hope to control the formation and growth of these instabilities, thereby increasing the plasma efficiency.