Renewable energy sources are highly desirable in this era of dwindling petroleum reserves and increasing environmental concerns. Solar energy and wind energy can cover a substantial share of global energy needs, but due to the intermittency and diluteness of these sources, storage in energy-dense commodities, is required. In the group of catalytic and electrochemical processes for energy applications, we combine solid state electrochemistry with (photo)catalysis and plasma chemistry to improve the efficiency of existing and to develop new routes for energy storage.

A PEC cell is a device that can potentially achieve water splitting, and thus production of hydrogen or converting CO2 to fuel, using sunlight as the only energy input. Most of the PEC cells described so far in the literature are designed to operate in liquid phases. The main disadvantages of these cells is the low solubility of CO2 in liquid media and the difficulty to scale up.

In our group we focus on the optimization of an alternative PEC reactor and electrode design that can overcome these difficulties by gas phase operation. Reactor design is inspired by polymeric electrolyte membrane (PEM) electrolyzers and thus the two PEC electrodes are separated with an ionically conductive polymeric membrane. These PEM-PEC cells offer a variety of advantages vs the conventional liquid PEC since they allow gas phase operation which ensures ease access of CO2 to the electrode, direct separation of the reaction products and also offers the possibility of capturing water from the ambient air (which implies that virtually no liquid water is needed for operation, making it a water-neutral process).

Our photoelectrodes are typically supported on a Ti-web of microfibers. Conventional gas diffusion layer electrodes (TiO2 nanoparticles decorated carbon microfibers) suffer from strong recombination of the electron-hole pairs at the TiO2 particles boundaries and poor thermal stability of the carbon substrate. In order to resolve these drawbacks, we have developed and successfully used photoanodes of titania nanotube arrays, prepared by electrochemical anodization of a Ti-web and its subsequent oxygen annealing. Loading of the substrates with low amount of Pt using Atomic Layer Deposition (collaboration with PMP group of TU/e) is in progress. 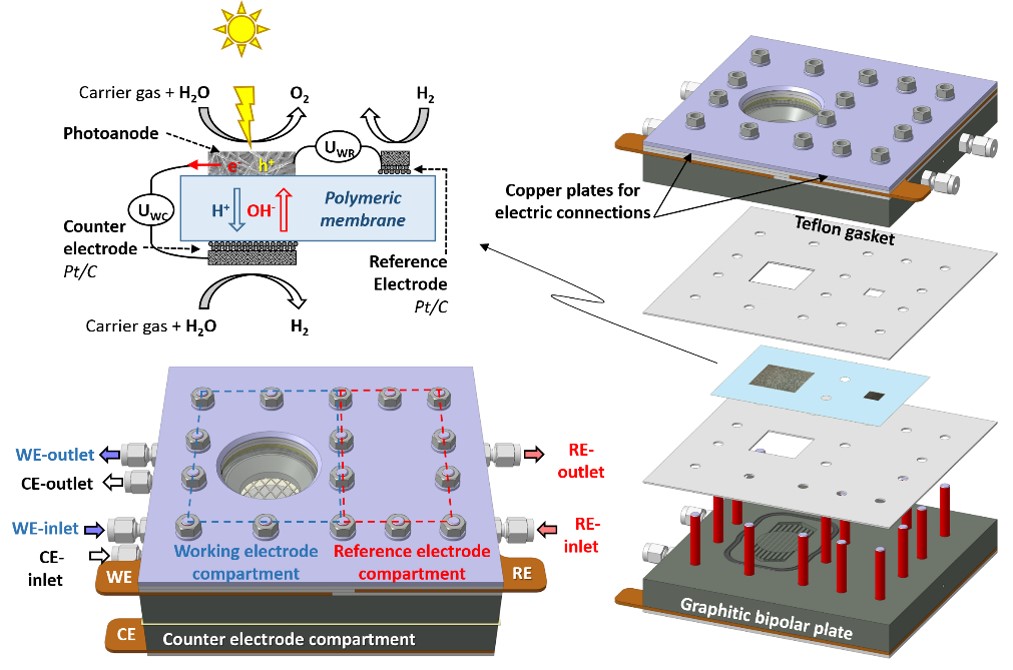 As a second step and in order to adapt our concept to the visible part of the solar spectrum (TiO2 is limited to UV-light irradiation), we synthesized a new class of photoanodes by using the heterojunction WO3/BiVO4 on porous titanium substrates. This was achieved in collaboration with FNA group of TU/e by combining electrochemical anodization of sputtered tungsten layers and BiVO4 formation via SILAR method (Successive Ionic Layer Adsorption and Reaction). Using these photoanodes, we achieved for the first time gas phase water splitting with performances similar to those of conventional liquid electrolyte photoelectrochemical cells under visible light irradiation and without the use of a co-catalyst.

On-going research is focused on the possible use of hydroxide ions exchange membranes (collaborations with Newcastle University and with Bulgarian Academy of Sciences) in order to obtain an alkaline environment that should boost the efficiency of the system. Within this perspective additional electrodes modifications, such as the addition of protecting layers of oxides (i.e. TiO2, SnO) and /or co-catalysts (e.g. CoOx, Ni-Fe-OOH) are also considered in order to ensure increased stability and performances. Finally, photocathodes based on Cu2O nanorods are used for the CO2/H2O valorization in the PEM-PEC cell.

Synthesis gas, carbon monoxide and hydrogen, is a key intermediate for reactions that produce energy-rich chemicals such as synthetic natural gas (SNG) and liquid fuels (via Fischer-Tropsch synthesis). These chemicals are easy to use and store and are compatible with existing infrastructure. They are in particular important to store excess electricity inherent to intermittent energy sources such as solar and wind power.

In cooperation with Syngaschem, we investigate high temperature water and carbon dioxide co-electrolysis to synthesis gas using oxygen ion conductors. High temperature (co-)electrolysis is the reverse process of fuel cell operation and thus similar material are used. The state-of-the-art materials for a solid oxide fuel cell (SOFC), are yttria stabilized zirconia (YSZ) for the electrolyte, Ni/YSZ composite materials, cermet, for the fuel electrode and La0.85Sr0.15MnO3±δ (LSM) or La0.6Sr0.4Co0.2Fe0.8O3±δ (LSCF) perovskites in combination with YSZ or GDC (gadolinium doped ceria) for the oxygen electrode. Ni/YSZ display excellent catalytic properties for fuel oxidation and good current collection, however it exhibits disadvantages, such as carbon deposition and poor redox cycling causing volume instability. In the case of (co-)electrolysis applications Ni is oxidized leading to NiO/YSZ electrode which does not possess the important functionality of current collection (NiO is a poor conductor). Thus Ni/YSZ cannot be directly used in (co-)electrolysis applications (it is only possible if there is co-feed of H2 which preserve nickel in its metallic form). 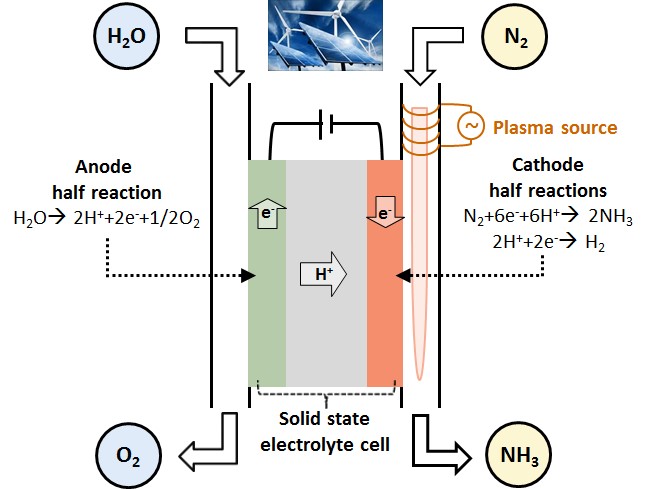 Our aim is to develop a proton-conducting solid oxide electrolyser for the direct synthesis of hydrocarbons and/or alcohols from CO2 and H2O. In the proposed system H2O is oxidized at the anode, while CO2 is in situ reduced under load conditions and in the presence of an appropriate electrocatalyst to hydrocarbons and/or alcohols (e.g. CH4, CH3OH) to promote the selectivity towards the latter. To overcome possible limitations of product selectivity and to improve the reaction kinetics, electrochemical cell operation with novel electrode/electrolyte formulations is employed. For further tailoring of the product selectivity, the approach is combined with direct vibrational stimulation of CO adsorbed on the metal catalyst, as well as vibrational excitation of COx (x=1,2) molecules present in the gas phase adjacent to the electrode.

Based on proton conductors, we are developing an all-electric single-reactor technology combining the strengths of electro-catalysis and plasma activation in the conversion of renewable energy. The aim is to improve the reaction kinetics and/or the selectivity of uphill electrochemical reactions (such as fixation of N2 by water), through plasma excitation of the molecules. The figure below illustrates the case of a plasma aided electrochemical device for ammonia synthesis from water and nitrogen. The conventional electrochemical approach suffers from low selectivity for ammonia production vs the undesired hydrogen evolution reaction. It has been identified that the rate of this process needs to be improved by a factor of 50 in order to be commercially viable . The role of plasma in our approach is to activate nitrogen and shift the selectivity towards ammonia synthesis even at higher current densities and thus improve the overall production rate to commercially viable levels.

Industrial ammonia synthesis catalysts (Fe, Ru) need to be efficient in both the dissociation of N2 and the hydrogenation of N-atoms. In our approach these two steps are separated and therefore (cheap) hydrogenation catalysts (e.g. Ni, Co based materials) will be explored as candidate materials. In addition, a proton conducting membrane operating at low (e.g. Nafion or PBI based polymeric electrolyte) or intermediate (e.g. BZY ceramic electrolyte) temperatures will be used for extending the operating temperature window for ammonia synthesis.

The phenomenon of electrochemical promotion of catalysis (EPOC) effect refers to the pronounced, reversible and controlled changes in the catalytic properties (activity and selectivity) upon electrical polarization. In EPOC studies, electrochemical cells are employed, in which one of the electrodes is the catalyst for the reaction under study. By controlling the polarization, ions can be pumped to or away from the catalyst, changing its work function and thus its catalytic properties. Despite the apparent advantages of this system, such as in-situ controlling the coverage of the promoting ions, EPOC has not yet been applied in industry, mainly due to the much lower activity per catalytic mass than the classic nano-dispersed powders. In our group in cooperation with PMP group of TU/e and IRCELYON-CNRS (France) we are working on novel catalyst designs based on atomic layer deposition for overcoming the main obstacles that limit EPOC commercialization, i.e. low metal dispersion and surface area catalysts.

Sodium-sulphur batteries (NaSBs), are considered as potential energy storage systems for stationary electric storage applications. The main advantages of NaSBs are the high energy density, high efficiency of charge/discharge, long cycle life, and that they are fabricated from abundant and low cost materials. NaSBs batteries employ sodium (Na) and sulphur (S) as active electrode materials, and beta-alumina (Al2O3) ceramic membranes as the Na+-conducting electrolyte. Traditional NaSBs operate at high temperatures of 300-350 oC, where both of the electrodes are in a molten state for having the optimum electrochemical reactivity, and for the beta-alumina membranes to have the optimum ionic conductivity. However, safety issues related with high temperature operation triggered novel NaSBs battery concepts, which aims at operating temperatures just above the melting point of sodium (i.e. 120-150 oC). These operating conditions introduce challenges that need to be addressed for optimizing the new NaSBs. In this context, we focus on the challenges related with the NaSBs cathodic compartment. We investigate the effect of catholyte composition and refreshment on the efficiency and stability during charge-discharge cycles.

END_OF_DOCUMENT_TOKEN_TO_BE_REPLACED 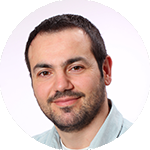