4 February 2009
An international group of researchers including prof.dr. Wybren Jan Buma from the University of Amsterdam and dr. Anouk Rijs of the FOM-Institute for Plasma Physics Rijnhuizen have published detailed measurements of so-called rotaxanes. The researchers state that "it is for the first time that this technique is used to map such large and complicated molecules in such detail". The group published their breakthrough in the prestigious Journal of the American Chemical Society.

Rotaxanes are viewed by many as candidates for motors in future nanomachines. They are large molecular systems consisting of a free-moving ring around a central axle. 'Stoppers' at the ends make sure the ring can not slip from the axle. The ring can temporarily attach itself to so-called 'anchor complexes'. When there are several such anchors on the axle, light, electrons or a changing environment can make the ring change positions.

Anouk Rijs and her colleagues use infrared spectroscopy to examine the structure of the different parts of the complex and their interactions. With this technique they can obtain a fingerprint of both the constituent parts and the complete rotaxane. By comparing the patterns, direct information on the location and strength of a bond between ring and axle can be obtained, without complicated calculations. This way the effect of different anchor complexes can be studied. "It is possible to choose the anchors in such a way that their effect can be very well separated from other interactions in the system", says Rijs.

In a future project, dubbed "molecular motors in the gas phase", the researchers want to see how sensitive the interactions between parts of the rotaxane complex are to other molecules in their surroundings. They will also try to make the different parts move with respect to each other. 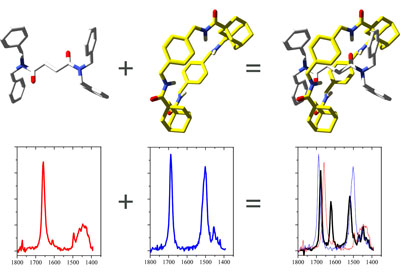 Rotaxanes, or ‘molecular motors’ are molecular complexes with parts that can move with respect to each other. The team of Wybren Jan Buma and Anouk Rijs carried out detailed measurements using infrared spectroscopy of rotaxanes in the gas phase. By comparing the infrared spectra of the central axle (left), the ring (centre) and the complete rotaxane (right), it can be inferred how the components of the molecular motor stick together.
Credit: Rijs en Buma / FOM-Rijnhuizen