28 January 2009
Researchers and engineers of the FOM Institute Rijnhuizen have recently completed the vacuum system of the new plasma-wall-experiment Magnum-PSI and have found that it behaves exactly as designed. According to project leader Wim Koppers, the construction of the device is now "well under way". Scientists want to use Magnum-PSI to investigate the interaction between the reactor wall and the hot, burning plasma in future fusion reactors such as ITER. The research is intended to contribute to the design of the diverter, the part of the reactor where plasma comes into direct contact with the wall material and where the fusion product helium leaves the vacuum vessel.

Magnum-PSI's vacuum system was designed in large part by PhD student Hans van Eck and senior research engineer Paul Smeets. Their challenge was to integrate the various cooling systems with the vacuum chambers and to balance the forces in the construction, fit the device inside the future superconducting magnet and achieve the required vacuum pressures. "The exciting moment was when all the components were tightly connected and the pumps had their first run", comments Paul Smeets: 'Vacuum is such an important part of this experiment that these first results make us very happy and proud."

The coming year will see a lot of work being done on Magnum-PSI. Work on the plasma source is progressing and the superconducting magnet is expected to be delivered and installed during the summer. Measuring equipment will be installed in September and Magnum-PSI's construction will be completed at the end of 2009. The first experiments are expected to start in early 2010. 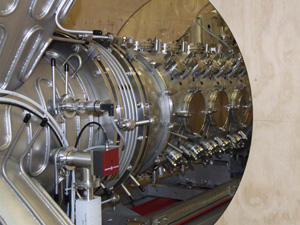