KEROGREEN is a collaborative European project on producing green kerosene. Goal of the project is to build a container sized production unit. KEROGREEN has been running for 30 months now. The project published an overview on what has been achieved so far. DIFFER developed a 6 KW lab-reactor and is working on a container-sized plasmolysis module.

This project is a stepping stone for DIFFER to develop a research plasma reactor into a more generic (turn-key) unit based on mature technology than usually used in the a lab. The prototype plasma unit has the potential to be used for similar approaches in a Power-to-X context. DIFFER work within KEROGREEN is headed by Mihalis Tsampas from the research group Catalytic and electrochemical processes for energy applications. The development of the plasma reactor is led by Stefan Welzel (Solar Fuels Facilities and Instrumentation) and his team. Welzel: “Kerogreen is a thrilling and challenging project. It translates results from fundamental research on individual aspects and building blocks of the energy transition into a container-sized plant.” Project partners across Europe will deliver at least one module for the plant which are going to be combined at Karlsruhe Institute of Technology (KIT) in 2021.

First plasma
At DIFFER a 1 kW RF powered CO2 plasma reactor provided the experimental data for the modelling efforts in this project. The first plasma in a 6 kW lab-reactor has been ignited and construction of the 6 kW RF container-sized plasmolysis module is ongoing. Following the splitting of CO2 in the plasma reactor, oxygen is separated out from the CO/CO2 gas stream by electrochemical means.

After testing several different powder compositions produced by Cerpotech, two materials were selected as candidate material for the plasma electrode of the high temperature solid oxide cell, the basic component of the oxygen separator. The materials are deposited onto the electrolyte substrates and characterized by VITO. The (electro-)catalytic properties of the selected electrode materials are currently being assessed at DIFFER. 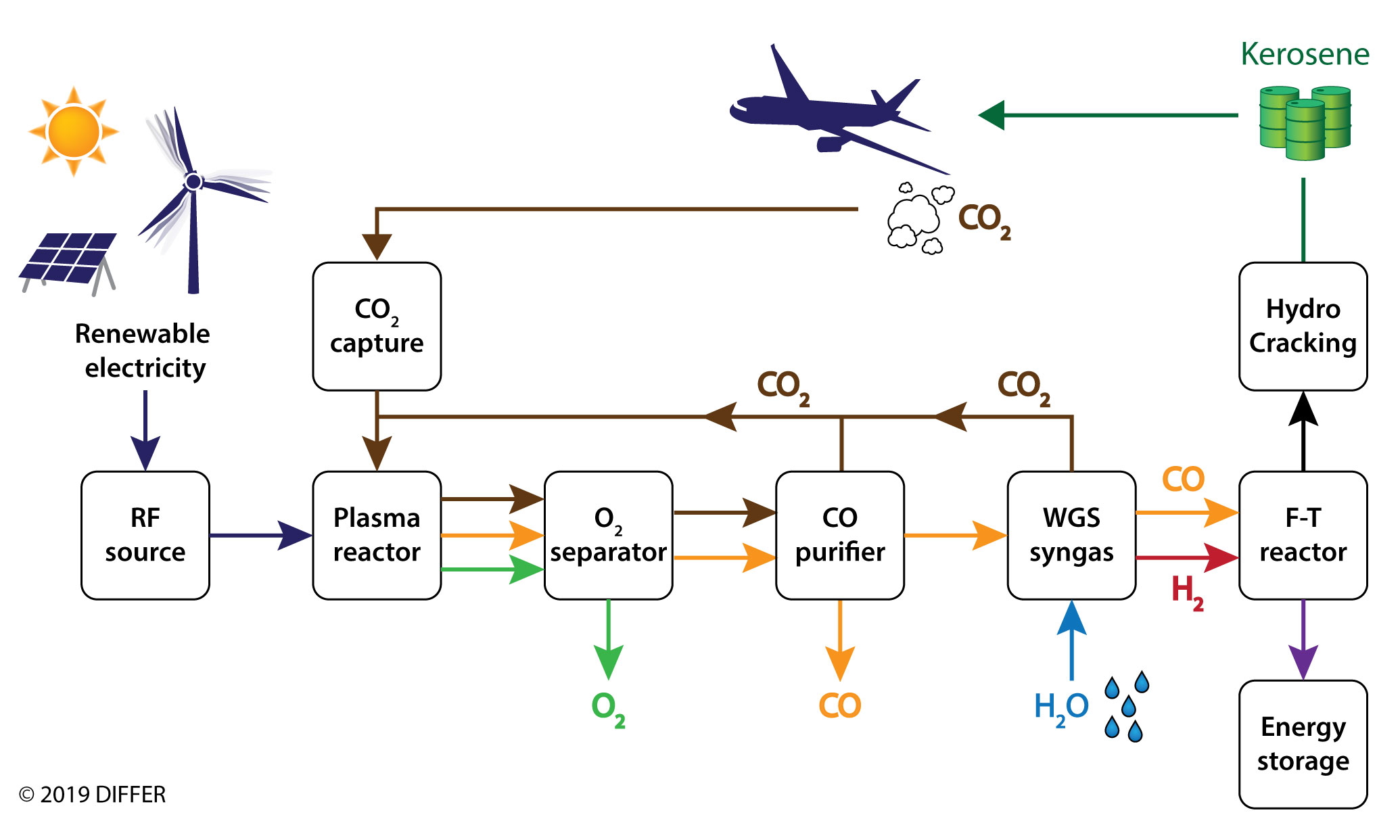 Stack
Cell integration into a stack is progressing, and the stacks are expected soon. The layer deposition process is presently being scaled up at VITO so that in the next phase of work the stack can be coupled to the plasma reactor. HyGear is working on the engineering of the oxygen separation module.

The CO purification module, based on Pressure Swing Adsorption (PSA), has been fully developed and assembled at HyGear. It is now being tested as a stand-alone purification system, in order to optimise performance and gather sufficient data to characterise its response to different operating conditions, feed compositions, flow rates, etc. The feedback from the test campaign will be used to update the model of this module, as well as that of the integrated KEROGREEN process. After the tests are finalized, the system will be shipped to KIT for integration.

Desired avitation specification
At KIT, the design and construction of the Sorption-Enhanced Water-Gas Shift (SE-WGS) module employing advanced CO2 hydrotalcite-based adsorbent has been completed. The experimental tests of the SE-WGS system in the laboratory are providing information required for the system operation. The innovative INERATEC evaporation cooled Fischer-Tropsch (FT) reactor based on a micro-channel cooling design has shown desired process intensification. The KIT Hydro-Cracking (HC) unit for optimizing the kerosene product yield shows the desired aviation specification. The HC part will be integrated with the FT module during autumn.

All the experimental work has been accompanied by theoretical modelling, including the plasma chemistry and the reactor model at DIFFER and the overall simulation of the process detailing the chemical processes in the SE-WGS, FT and HC units at INERATEC and KIT. Validation of the model by experiment and prediction of integrated process performance is currently in hand.