CO2 can be converted to CO and O2 if enough energy is pumped into the molecule. This energy is stored into vibrational quanta and pumped using electrons which are accelerated by electromagnetic fields. Computational models used nowadays are based on strong approximations, due to the complex chemical network and the presence of multiple time and length scales. However, the population distributions for vibration, energy and velocity need to be described in an accurate way in order to have a realistic model.

Extrapolation of laboratory results to large scale industrial application of CO2 activation requires understanding of how to selectively channel energy through vibrational excitation to molecular dissociation. Our research aims at providing understanding by first principles modelling, through self-consistent incorporation of vibrational kinetics (molecular physics) in plasma models. Novel approaches to improve shortcomings in current models for the vibrational kinetics and the electron energy distribution are currently under development. Those approaches can also be applied to other molecules in non-equilibrium plasmas. 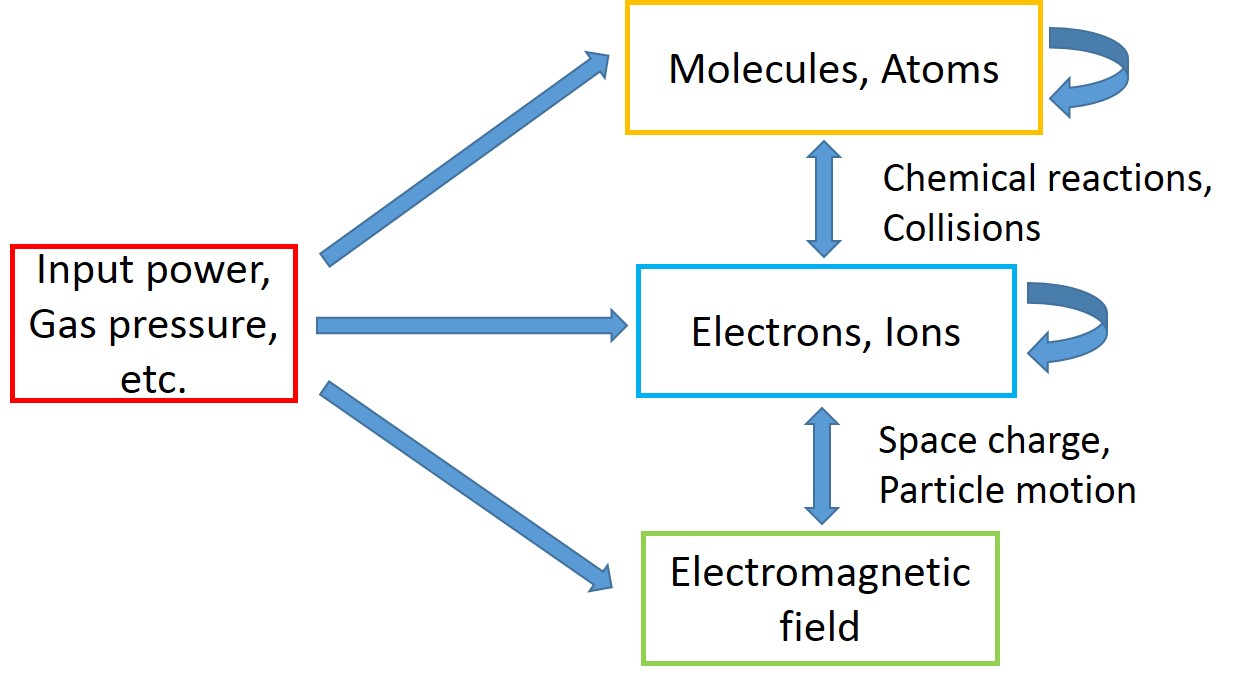 Schematic of a molecular plasma model.

Radio frequency (RF) capacitively coupled plasmas (CCPs) are used routinely for thin film deposition and etching, as well as chemical modification of material surfaces. In such applications, the flux and energy of reactive radicals and ions bombarding the substrate are of critical importance. Computer simulations, in combination with well-defined experiments, are instrumental in understanding plasma creation and transport as well as plasma–surface interactions. While many attempts have been made to study the complex kinetics of active species produced in the multi-component feeds, an unavoidable first step is the achievement of a real good (predictive) model for discharge plasmas produced by single component feeds. After much research on rare gases, the attention of several research groups was attracted in the last few years by hydrogen. This gas, in fact, is an important component of the gas mixtures used in many real processes like diamond and amorphous silicon film deposition, due to the high reactivity of hydrogen atoms produced in this plasma.

A one-dimensional in space, three-dimensional in velocity space, fully self-consistent kinetic model has been developed to study RF CCPs in hydrogen. This 1D model can be defined as a hybrid particle/fluid where the charged species (electrons and H+, H2+, H3+ and H- ions) are described as particles propagating under the effect of the self-consistent electric field, while the neutral particles, namely 14 vibrational levels of the electronic ground state of H2, plus H atoms, are described in terms of numeric densities on a mesh which are the solution of a system of rate equations including the diffusive propagation and surface effects. 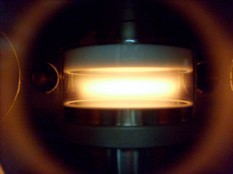 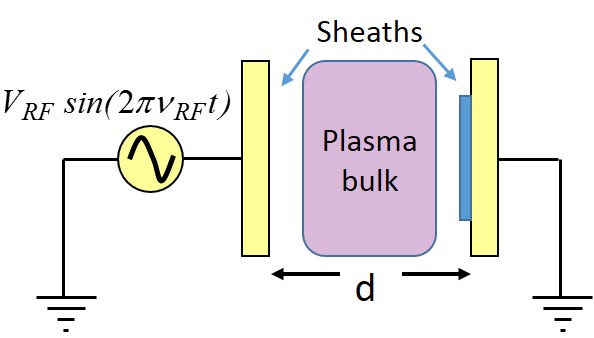 A capacitively coupled plasma from the experimentalist's (left) and modeler's (right) point of view.