The new experiment Magnum-PSI of the Dutch Institute for Plasma Physics FOM Rijnhuizen produced its first magnetised plasma beam on 4 October. Magnum-PSI is the first facility to expose materials to hot, ionised gas (plasma) with the exact conditions as expected in the future fusion reactor ITER. The experiment already deposits a power of 8 MW per square meter on the target, comparable to the expected load in ITER. The research with Magnum-PSI will enable the design of wall materials that are more resistant to the hot, intense plasma in the fusion reactor. 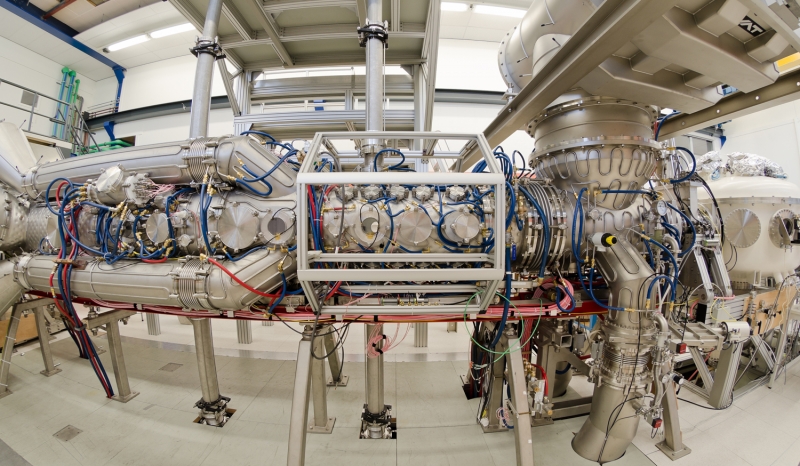 Side view of the 15 meter long Magnum-PSI experiment. To the far left, a cascade arc plasma source produces plasmas of Hydrogen, Deuterium or Argon. The vertical tubes guide lasers which determine the temperature and density of the plasma via Thomson scattering. In the center of the photo, the plasma beam impinges on the target plate. A movable arm can then retract the target into the target exchange and analysis chamber, a vacuum chamber for materials research without exposure to contamination in the air. The magnets which focus the plasma into a beam were not installed at the time of this picture.
Photo: Bram Lamers

Scientists wish to develop fusion energy, the power source of the sun and stars, as a clean, sustainable energy source on earth. When light atomic nuclei melt together (fuse) to form heavier nuclei, they release large amounts of energy. In the sun, Hydrogen fuses to produce Helium; in a fusion reactor, the hydrogen isotopes Deuterium and Tritium combine to form the same end product. The worldwide fusion community currently works to build the advanced fusion reactor ITER in the south of France. Starting 2019, ITER will demonstrate the technical feasibility of fusion energy. The reactor is capable of producing up to 500 megawatt of power, ten times more than it itself needs to operate and as much as a small energy plant. The experiment paves the way to the larger demonstration power plant DEMO which will come online in the 2040's and will produce as much power as a large, coal fired power plant: 1000 to 2000 megawatt.

Interaction between a hot plasma and a reactor wall

Magnum-PSI was designed specifically to investigate the interaction between a fusion plasma and the wall of the reactor vessel. In a fusion reactor a dedicated wall component, the divertor, removes the reaction product Helium from the reactor. The plasma near the divertor has a temperature in the order of 10.000 degrees and the incoming plasma can damage the divertor material. The way in which this happens strongly depends on conditions such as the plasma temperature, energy per particle, particle density, and the strength and direction of the magnetic field.

Magnum-PSI is the first facility in the world to simultaneously produce ITER-relevant values for all these plasma conditions. A cascaded arc plasma source produces a hot, dense plasma which is then guided to the target by a magnetic field. The experiment also has an extensive diagnostics suite to analyse the plasma and the wall material during and after exposure. 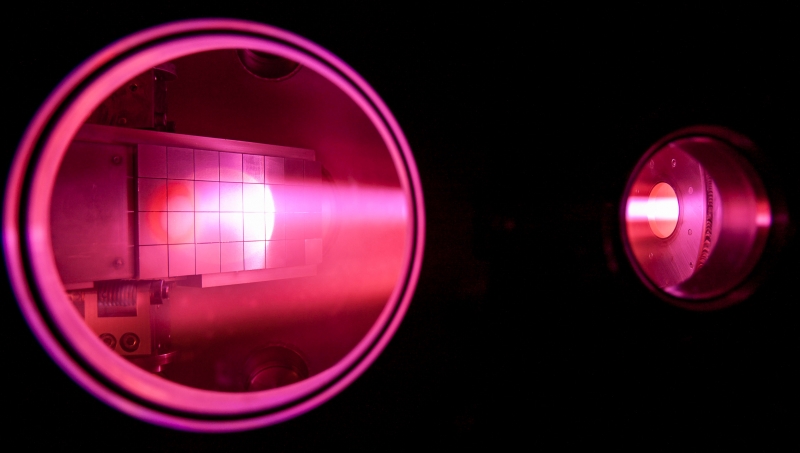 One of the first plasma beams in Magnum-PSI, a hydrogen plasma confined by a 1.4 Tesla magnetic field. The background noise consists of the large roots pumps which keep the insides of Magnum-PSI at the ITER background pressure of 1 pascal. Click the image for the accompanying Youtube clip.

Dr. Pedro Zeijlmans van Emmichoven heads the operations tem which designed and built Magnum-PSI, and which is now preparing the device for the experimental campaign. "The plasma density, intensity, temperature, the magnetic field - everything is is the ITER relevant regime. We're breaking records here! The plasma conditions we can achieve in Magnum-PSI are over ten times more intense than in other laboratories."

Magnum-PSI can investigate the interaction between the plasma and the reactor wall of ITER in great detail. DIFFER wants to use the facility to create strategies to increase the lifetime of the ITER wall. The institute analyses how the wall material can get damaged, and investigates how the plasma reacts when eroded material from the wall ends up in the plasma. A different research topic is understanding the unwanted retention of one of the fusion fuels - tritium - in the reactor wall.

DIFFER's director prof.dr.ir. Richard van de Sanden is proud of the first magnetised plasmas in Magnum-PSI . He's looking forward to the research phase: "Nobody has ever been able to see what happens to a reactor wall under such extreme conditions. With Magnum-PSI, we can investigate this in a laboratory setting for the first time."

After the first magnetised plasma, Magnum-PSI is now being prepared for its experimental campaign. Scientific experiments on plasma-surface interaction start early 2012. The device will be given a superconducting magnet in the future, which can maintain the plasma beam for hours at a time. This enables research into long term effects of exposing a material to the ITER divertor plasma.